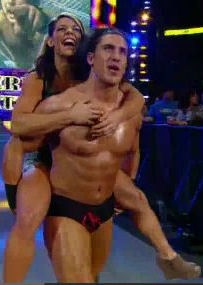 I was going to cancel the Top 4 this week because there were only two matches and one segment, damn the Road to Wrestlemania. But then I kept looking at it wondering if I could write a straight review of the show, and the answer simply was, ‘no’. I am just not good at continually writing about things I don’t like, it’s kill me even to mention that the second match of the night was Titus O’Neil versus Jey Uso. While I love the Usos they work better as a team and my irritation with O’Neil just will not go away.

So I fixed it.

He wins on commentary in this episode. Regal is always a pleasure to listen to but there was something about this episode where he sounded a bit more enthusiastic, especially when talking up Derrick Bateman. You know that’s always a winner for me. Still, this man is an expert at hating the talent while talking them up while not concentrating on the match at all and still making it sound great if he so chooses. During this week’s matches he talks up Derrick and Hunico making you believe these men are worthy of more attention than either get. There is a good reason William Regal is my second favorite commentator currently with the WWE and he proves it in this episode.

My guess is they are about to turn Darren Young face again. Why else would they have him crushing on Tamina, buying her a coconut tree because she had told Derrick she wanted one, and say that he would lie, cheat, and steal in the ring but never to a woman. Honestly, I liked Darren better as a face. Darren has that easy-going attitude and smile that works better in face situations or attitude. He also made my second favorite commentator of the night when he went and joined Regal, Mathews, and Jimmy Uso to help call the Titus O’Neil vs. Jey Uso match.

Who’d have thought that these two would turn into such entertaining characters? Maxine was my least favorite diva on NXT Season 3 and while I liked Curtis I had not watched enough of his season of NXT to really have cared that much. He was funny in his Smackdown promos but there was no real character to him and Maxine had just reiterated that she would always end up, “On top.” Now the two of them have found a flow and work well off of one another as they search for Striker, letting us know that Striker on Superstars is just a stunt double. Johnny works creepy like no one, and I mean no one, really has before while Maxine is always read for a cat fight with men three times her size. The pint-sized diva and the towering weirdo work their stuff against the other Superstars of NXT and do it well.

YAY! Derrick WRESTLED! His last match was a mixed tag match and, let’s be honest, gave him very little wrestling time to strut his stuff. Derrick was up against Hunico who, no matter what you think of his character, is an amazing wrestler. Together these two work miracles and bring what should have been the main event to the forefront of the show. Derrick does what has become pretty much famous to him now: dropkicks, while Hunico moves swiftly and smoothly around him. Even though Derrick loses the match I was so happy to see him wrestle, and against someone I have a good amount of respect for, that I’m fine with it. If you were only going to watch NXT for one thing this week, watch this match. (but really, watch it all) Oh, and did I mention Derrick gives Kaitlyn a ride to the ring? On his back. Somehow this was just too cute.