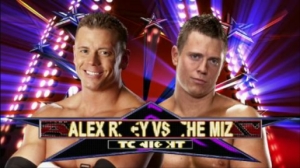 Superstars did… something different! For that it was already a better show this week than it usually is. There was no Jinder winning with the camel clutch and no needless squash matches considering Superstars is all about the wrestling (though they should take out some of the recaps and put in a fourth match again, really). But, despite doing something different there was still something a little… off with the matches.

4. The Usos vs. Hunico and Camacho

Hunico is the best in-ring guy of the four. I like the Usos, I like their entrance, but they just don’t have it yet for wrestling. Camacho was slopping as Marlow in FCW and though he was part of this “tag team” he didn’t do much of anything and when he did it still seemed like he was back in FCW. The only reason this match made it on the list is 1) I like Hunico and was looking forward to seeing Camacho wrestle and 2) there are only 3 matches.

I was going to be down on this match from the start. We’ve seen The Miz vs. Alex Riley. So many times. I was going to rant and whine and… well, then I watched it. Alex Riley shows how far he’s come as Miz and Riley put on a match that was well put together and had no botches. This was actually a great match. Let’s watch it again! “Who’s the Superstar?”

This is a man who sounds happy to be there and excited to see every match. It’s a shame he only does the Raw portion of the matches. This man is music on the microphone and knows how to call a match. There is no bias, even as Striker tells him he sounds like he really likes the Miz and Scott in turn says, “I don’t really like him, but I like anyone on the show that can help with the ratings and Miz can make that happen.” Scott looks at the full picture every time he’s on Superstars with the matches in front of him.
Matt turns to Scott at one point and says, “I don’t think anyone tunes in to hear you or I…” Sorry, Striker, but you could not be more wrong in that. I tune in every week for that voice of Stanford’s, the matches are my bonus.

“Kelly Kelly coming from behind.”

“When I said coming from behind I didn’t mean literally with that booty call.”

“WWE Superstars is about to become must see.”

“You’ll be able to cut the hatred, my friends, with a Ginsu knife.”

“When it comes to Miz and A-Ry, these guys would rather get a root canal with no Novocaine than lose to the other.”