This review is part of the Countdown to Halloween. Check out that link for more articles from like minded blogs during this spookiest of seasons. 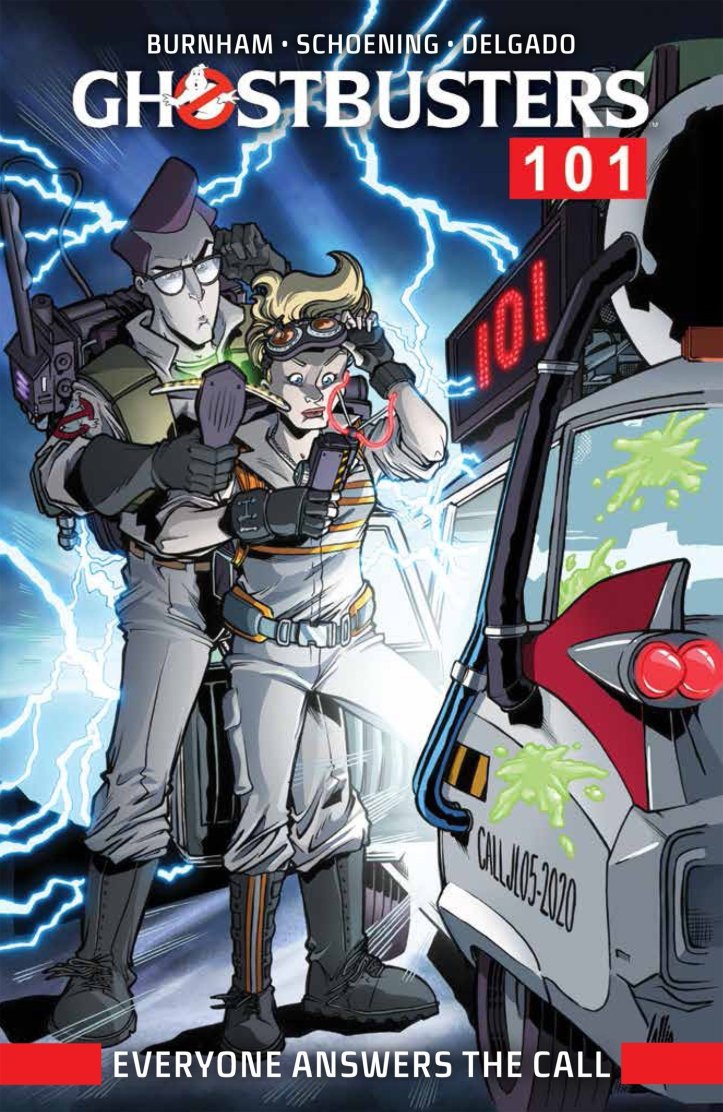 This graphic novel collects six issues of the Ghostbusters 101 series. IDW has been publishing new Ghostbusters stories for the last few years, but this may be the biggest ever. The classic team and the all girl team have to team up to stop an inter-dimensional threat.

While many online hate the 2016 Answer the Call movie (and when did it officially gain that subtitle?) it’s a big hit in this house. The Ghostbusters has the potential to be a timeless concept. Reboot every few years. A group of character types get together and through a blend of science, comedy, and horror bust ghosts. That’s all. The average person on the street knows of Ghostbusters but most likely cannot name the characters. The actors, probably. But definitely not the characters. Because that’s not what’s important. It’s the concept and all the avenues that opens.

In this series the original team begins training new Ghostbusters, with varying degrees of success and comedy. Readers of the current IDW series will have more familiarity with these trainees and other newer characters, but it is not required to enjoy the 101 series. Side note, to my knowledge these aren’t the Extreme Ghostbusters. Leave a comment if I’m wrong. Considering another two panel joke elsewhere in the comic I would have liked a cameo by this team as well to tie everything in.

The new recruits get too comfortable in the firehouse and start playing around with equipment they shouldn’t. A history that goes all the way back to Peck in the first movie says don’t touch experimental scientific machinery you don’t understand. They think a little bit of ectoplasm crossed dimensions and all is well, but no. That little bit acts as a tether and is pulling the two universes together, with all of the spiritual energy that makes up reality. The Answer the Call Ghostbusters become aware of these anomalies. Little by little both teams realize something is amiss until they’re literally on top of each other.

From there on the series is a love letter and best of for everything from both teams. Trading tech. Making inside jokes to their previous movies. Showing the bond between similar character types and the annoyed respect from opposites. The movies have always had a villain with a sense of grandeur and that wasn’t the case here. Marshmallow fluff covers the city, rivers of slime, a ghost bomb. All of these were big events that affected the city. While all the characters walk away in one piece, there was at least a feeling of a world changed. Not so much here, when really it should feel doubly so as two worlds were altered. Or maybe that’s my fault as an experienced comic reader. By no means is it a knock. The story is loads of fun, but certain beats were telegraphed.

The series ends with a promise that this isn’t the last time the two teams will meet. While the door is now controlled, it is not closed. As the generations have more and more meetings on the comics page this concept could become the annual JLA/JSA meetup of the paranormal.