If there is a child in your house under double digits in age, chances are you have heard of Ryan. A bowl cut moppet who has adventures and sells toys, I mean reviews toys, on his YouTube page. Ryan is a phenomenon who’s ascent and marketing will be studied for years.

As a father of a six year old, Ryan has infiltrated our house as well. While not the rock star he was a year ago, we’ve added to his millions of YouTube videos. There is also a dedicated storage tote to his variety of blind box and bag themed toys on a shelf in Bear’s bedroom. Never one to shy away from all that is capitalism, we invited this boy over for breakfast. Presenting, Ryan’s World cereal. 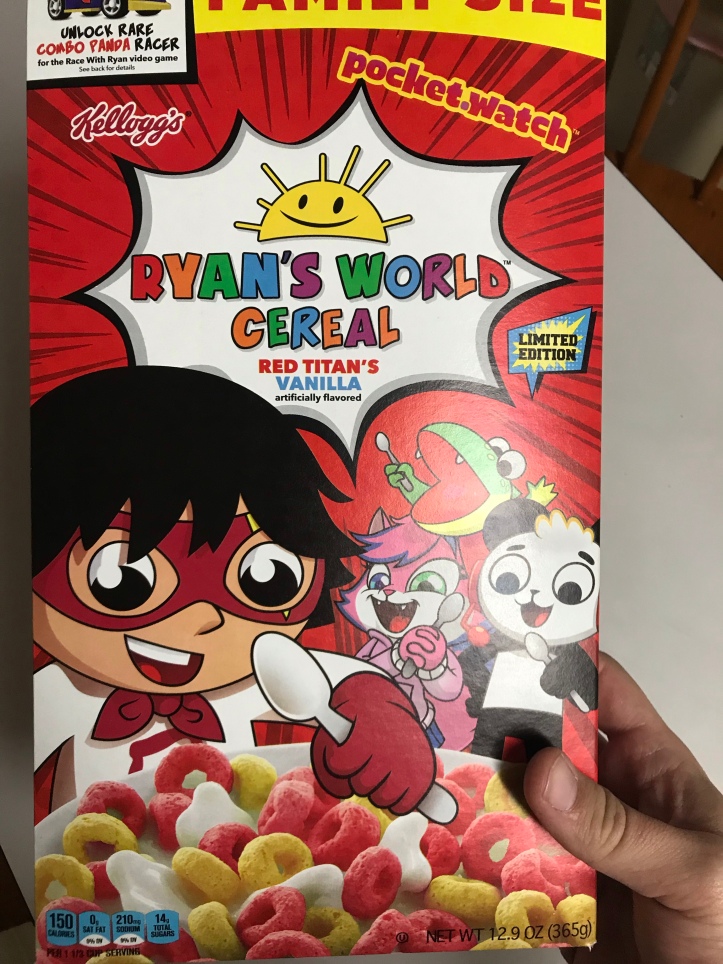 Limited edition! Which means as long as Ryan is popular, this cereal will be on shelves. But any property that depends on an innocent child for it’s foundation has mere years of existence. Maybe Ryan has a cousin Oliver. On the cover is Ryan as his super hero persona, Red Titan. Good idea marketing his alter ego cartoon that will never age. Ryan is accompanied by Combo Panda, who he plays video games with on one of his many channels. The two of them buddy up with Gus the Gummy Gator. An alligator who loves to eat gummy snacks and somehow found character development out of that. Rounding out the group is a later addition, Alpha Lexa. Clearly a gateway character for girls, but we are all good with that here. Gamer, treated equal to the boys, but also her own person. She may have not been one of the original characters created for Ryan’s World but she’s more than welcome here.

A free character to unlock?! And all I had to do was buy a box of cereal? What a deal! Now all I have to do is buy a $40 game. And a system to play it on. Probably subscribe to some sort of online thing too so we can play against other people. But hey at least this one character was free. As long as I keep the box and receipt. If not, I may have to buy another box. As long as I’m buying two boxes of cereal, how is it?

Good bright colors. No doubt attractive to his target audience. They don’t taste at all like those colors though. The vanilla flavor is strong throughout, with the sugar making it stand out even more. Not a bad vanilla or sugar taste. Akin to someone was baking cookies and poured a bit too much extract into the blender. Still good, still going to eat all of it, but the vanilla taste is stronger than ‘normal’.

If you ever wished Toucan Sam wanted a break from fruit flavors and tried vanilla for a day, you’re in luck. Otherwise it’s a perfectly fine but forgettable merchandise tie in cereal. I’ll always buy them and try them, but very few are ever memorable and even fewer stick around.