From Peter Beste. This hardcover showcases hundreds of pages full of battle vests. 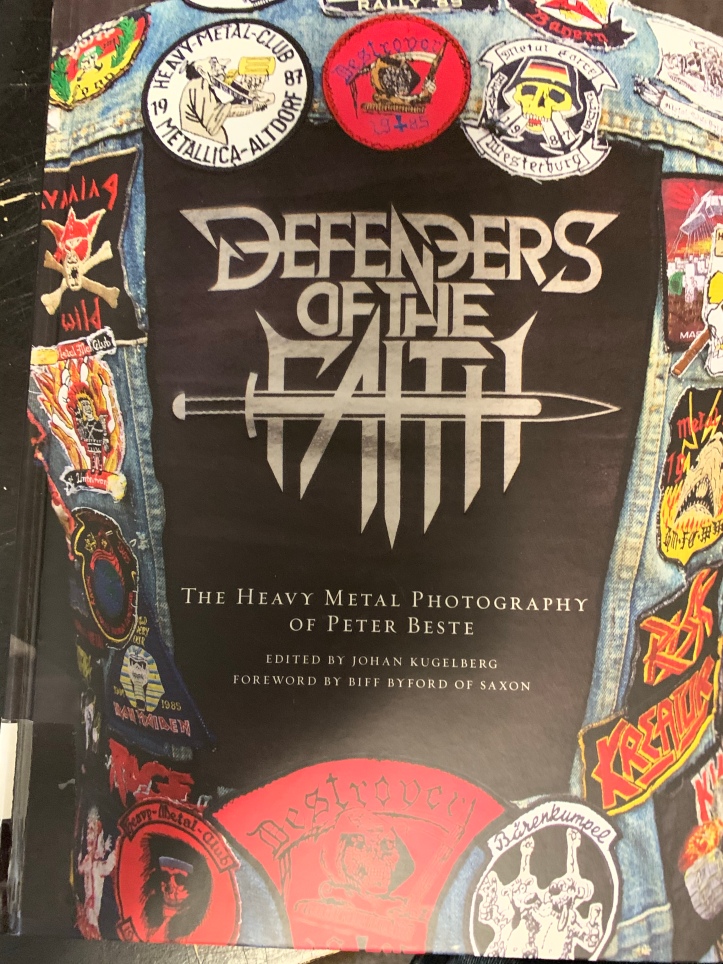 What is a battle vest? The usually denim sporting from one to dozens of patches extolling the wearer’s favorite metal bands. Worn not only at concerts, but throughout life as a calling card. A symbol recognized from a distance. “I rock. If you rock too, we can talk.”

This book takes a concept I recall seeing (for check or money order) in the back black and white pages of Metal Edge magazine. One big patch for the back and many smaller patches surrounding it then wrapping around to the sides. While this world may have begun in my mind via mail order it has grown to a form of art. As sub genred and varied as the bands stitched into every patch.

Not Eddie Guerrero is about to kick someone’s ass on tonight’s NWA Saturday Night. Then stay tuned for the Rock n Roll Connection.

And some of it is goofy to an outsider. I chose this page because I could hear the snickers coming. But here’s the secret. Much like wrestling and comics, metal fans are in on the joke. Yes, all three formats have fans that take it way too seriously, things that seem cartoonish at times. A stigma in the general culture. Yet within the fandom the truths and layers are revealed. Acceptance of the parts that are silly. Then a realization that there is so much depth and intelligence and creativity just below. The almost comedic iceberg you can see and then the wealth under the surface.

One of the most notable and respectable realizations below water level is the acceptance and shared community that is heavy metal. I’m guessing this show took place during daylight. Maybe during a county fair inside some multi purpose arena. A large enough city to draw in this size group of metal heads. Multiple vests within the picture. Men and women hanging out comfortably. Great age range. And of course the young girl with her markers and headphones. Unbothered. The community of metal can appear loud, scary, and dark. For good reason too. But it is also insanely protective. We can jump in the pit swinging arms, or bellow songs about demons and blood. At the same time we all know that John really loves this band but also really loves his daughter Sarah. So she came and a subconscious circle of protection forms around her. I have friends that have been to every genre of music concert possible: rock, country, rap, pop, and of course metal. To a one they have all said they felt safest at the metal concert. Men, women, and every one in between knows you can get knocked down head banging and it’s okay because someone will extend a hand to help you up. Every. Time. 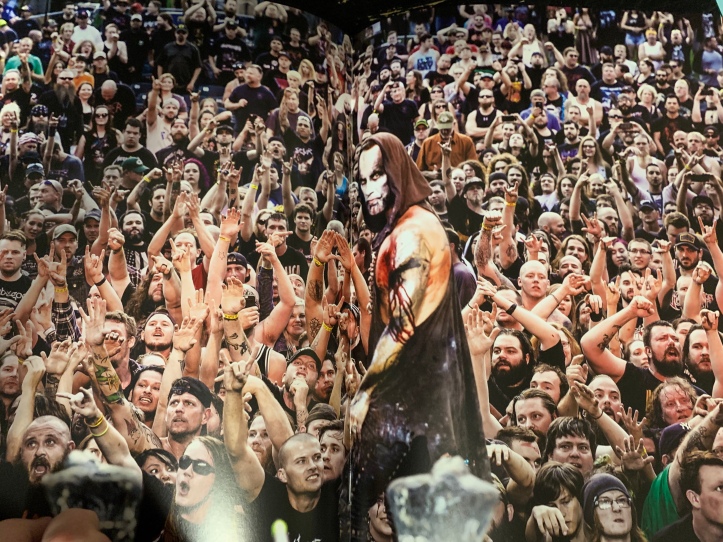 This picture was just stunning and should be a poster. Hundreds of fans for a band most of you have never heard of, and having the time of their lives.

That’s where the battle vests continue to act as short hand. From one look the wearer’s entire metal life is known. Not only bands they have seen, but cities they have traveled to. Roads they’ve driven, adventures that were had. Whether they’re new to the scene or veterans wearing a threadbare denim.

In fact, since reading this book I have stopped fellow metal heads in public. A simple, “hey your vest is amazing, can I take a look?” There is a look of excitement in their eyes every time. Like they’ve been waiting for this moment. The spin begins as the wearer turns in an order he or she has reasons for. Chronologically? Order of importance? Most to least favorite? Who knows. Pointing at each individual patch in their own order.

Between this book and my subsequent run ins with fellow head bangers I have a list of about 50 bands I have never heard of before. Drawn in solely from an amazing patch. Something in the art, the logo, the intangible messages conveyed through the yarn.

That’s the love of metal that I felt through this book and within the community. The desire to share. To briefly shout out if I texted: my brother, Joe, Karen, Derek, the Heavy Metal Hangover podcast, and asked “hey I need a new band to listen to” their eyes light up and I get 5-12 names instantly. Peter Beste is doing the same here. Every single patch on every page is getting that band one new fan. Through this book Beste grows not only his audience but the entire community. A community that (for the 99% most part) doesn’t gate keep or shame because of what you are or are not into. If your playlist jumps from hair metal to death metal, that’s cool. Let’s grab a beer or a water or something because this is an outdoor festival over 100 degrees and a great band is up next.

All pictures copyright Peter Beste. Used from the book for review purposes.

Copy I read is through the local library system. I do not currently own the book, but will be planning on it.

If you would like to buy this book there is a gorgeous limited edition copy available at the following link:

Defenders of the Faith: The Heavy Metal Photography of Peter Beste