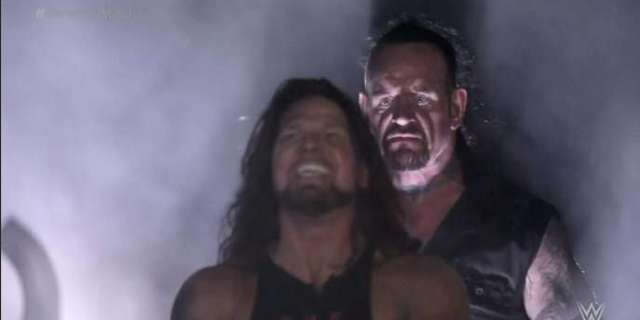 Last night was Night 1 of WrestleMania 36 and the main event of the evening was Undertaker vs AJ Styles in a Boneyard Match. No one knew what this match would be nor how or where it would take place. The WWE teased matches in different locations other than an empty arena but no one knew what to expect.

Add me to the chorus thinking this match was phenomenal and an instant classic in professional wrestling.

Two big take away’s for me after watching it a second time:

One, TV and film has always needed wrestling. TV constantly needs it for “cheap” content that brings in viewers. Constantly highly rated. Easy to film. Movies have through the years looked to wrestling for casting. Big guys, strange looking guys, stunt men. It’s nice to see this idea working in reverse. This is WWE going to film and TV. Arguably the best movie that WWE Studios has ever made. This is a VHS era low budget but brilliant horror movie. The more stories that come out about pulling this off, the more respect the entire presentation will be given.

Second, this match demands a reimagining of how wrestling matches are ranked. For years I have made a distinction between Hulk Hogan and Ric Flair. Ric Flair was the greatest wrestler of that era. Hogan was the greatest “sports entertainer” of that era. There is a difference. Both terms sound similar, Yet wrestling fans understand the distinction. This Boneyard match may necessitate a distinction between great wrestling matches and great sports entertainment matches. This was not a great wrestling match that can be held against Savage vs Steamboat, Michaels vs Bret, and on. It can be held as a great spectacle of the absurdity that is pro wrestling alongside Undertaker vs Mick Foley Hell in a Cell.

Wrestling only has to be two guys in a ring until it isn’t. Masks, tag teams, cages, even women; all of these were additions to what pro wrestling is and what it could be. So why not allow a more cinematic product? This goes back to WrestleMania XI’s Backlot Brawl. Recently Lucha Underground has shown a way to make wrestling a weekly linear story.

The real testament to this match is how influential it is bound to become. This is more than Matt Hardy having a singular vision for his character. This is a concept that can change entire shows, events, even how an entire company presents their shows. I absolutely believe that in 10-20 years we will point to this match and how it changed wrestling.