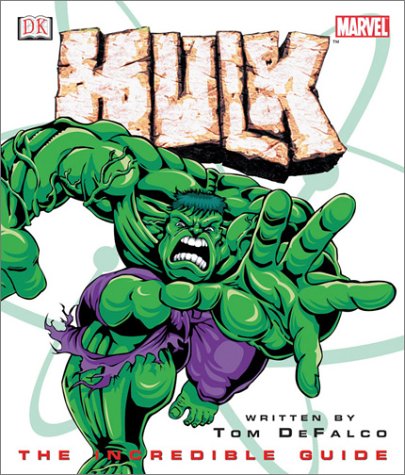 This book came out around the time of the first Hulk movie. The Ang Lee one. Not the Marvel Cinematic Universe one.

These DK super hero guides were very popular for awhile a few short years ago. Spider-Man, X-Men, there’s even a Ghost Rider one. As the movies and TV shows grow more popular non comic book readers keep asking us longtime fans where to begin. What Hulk comic or graphic novel should I buy first? That’s a loaded question that depends on the person asking. Usually. After finishing this book all I want to do is dig out my other similar books and buy any I’m missing. This was such a well done streamlined history of everything from Hulk’s many decade history in just over 100 oversized pages.

One of the problems of long running characters is where to begin? The dirty secret is not every issue matters. But that’s for another day. The Wikipedia article for Hulk is long and every other character major or minor has equally long write ups. Marvel used to publish handbooks to every character in the universe. By the time they went A to Z it was time to update the characters again. These comics were long pack a lunch reads for a single issue, much less the entire run.

This giant book though was a fun thing to read a couple pages at a time over breakfast and get immersed in the Hulk’s world. Broken up by decades, the characters are introduced as they came along chronologically. Differences in writers, artists, and society are obvious and add to understanding the themes. Along the way I’m discovering Hulk stories that I never knew, characters I was unfamiliar with, and goals for my next back issue purchases.

Harlan Ellison wrote a Hulk story about Jarella. A green skinned beautiful woman from another world who the Hulk falls in love with. I had never heard of this before. Harlan is one of my favorite writers. I love Planet Hulk partially because of Hulk in a love story. This sounds like a classic that for some reason isn’t as well known any more. That’s just one tale out of many.

This is where the book is most helpful. I don’t need to buy three, four, five hundred issues of Hulk stories. I need to get 10-20 of this story. Five from this writer. I learned more about the Hulk in this book that honestly is aimed at kids in a way, than I have known in my decades of reading comics. If anything there should be more of these books exploring all of comics. There’s enough history to do one monthly. Avengers, Captain America, Daredevil, Thor, Silver Surfer, Fantastic Four. And I haven’t named a single DC or other company’s property yet.

I cannot recommend this book enough and all of them in the series for helping comic readers discover the great lore of their favorite characters. Now to build some oversized shelves.