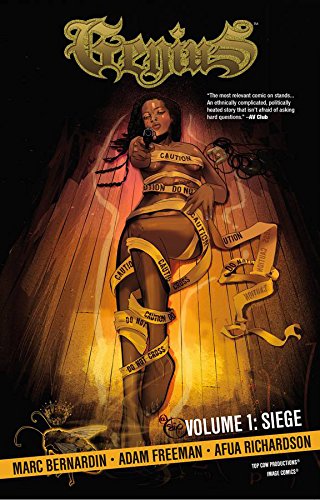 For those of you who don’t know, Marc Bernardin is the co-host of Kevin Smith’s Fatman Beyond podcast. Longtime readers know I’m a fan of all things Smith. The more I listened to this podcast the more I was drawn to Marc. I was fascinated with his thoughts and ideas. All of his opinions were well thought out and had to be respected, even if the listener disagreed. The more he speaks of his comic work the stronger my need to read it. Thanks to the stacks within the library, Genius was obtained and I lost my freaking mind over this book.

No super heroes. No magic. No futuristic stuff here. Imagine that once every generation there is a military leader from birth. Fate, gods, choose the reason you wish, but a mind that is able to strategize on the battlefield better than anyone else at the time. Alexander the Great, Genghis Khan, Patton. Now take that concept and put it into the mind of a teenage girl. Furthermore, have that teenage girl live in one of the biggest war zones of the world. South Central Los Angeles. Growing up surrounded by veterans of riots. Rodney King. Watts. A mind like this might be able to change the course of events.

The story is nuts. Flat out a military comic taking place in a major U.S. city. Positions, rank, sacrifices, agents, on and on. It’s incredible to witness because none of it seems out of possibility. From day one we’re divided. Rich, poor, black, white, man, woman, and on and on. Imagine if we were able to shake that and unite against true villainy? Marc and I on one hand couldn’t be more different. He’s living in LA writing things for millions that I review and might get read by hundreds if I’m lucky. From my small town on the other side of the country. Or. Or. We’re just two guys in our forties that love comics and struggle to raise our sons right. We probably have more in common than we do with people we’re “supposed” to hang out with. And that’s just an example of two random people in the entire world. Spread that out and more of us are on the same page than not.

So imagine if a leader who spouts a lot of sense rises up to focus all of that. That is the story of Destiny. All who come in contact with her are now in her hands. Part of her plan. Not always by choice.

The book takes Destiny far enough to be an incredible lead, but not this perfect genius. She makes mistakes. She loses people along the way. There are points in the story in which there is no doubt this is the end. But its comics, and there’s never really a permanent end is there?

I’ve written a thing or two I’m proud of, but I’ve never been able to draw something that expands off the page and draws other feelings in. Feelings like sweat, dirt, hot, claustrophobic, and more. Smelling a cook out. That metal water smell. Tasting the salt in your mouth on a hundred degree plus day. All of this comes across on every page in the book. I can feel the city through every panel.

The book ends with closure, but a wink of something more. There is a second volume, Genius: Cartel which is not yet here in the library but as soon as society opens back up I plan on tracking it down.

Highly recommend anything with Bernardin’s name on it.