(Slappy and) The Stinkers Book Review. 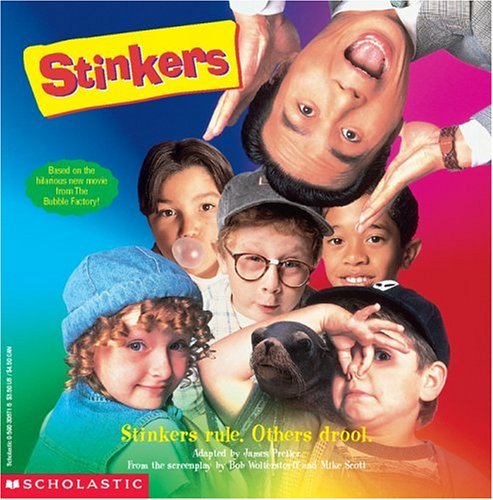 This book is from the personal collection. I have a lot of ridiculous books. If you have something ridiculous you would like me to review, please check the contact page and send an email.

Adapted by James Preller. From the screenplay by Bob Wolterstorff and Mike Scott. “Based on the hilarious new movie from The Bubble Factory.”

This book is based on the classic sea lion movie, Slappy and the Stinkers. A group of misfit seven year olds drive B.D. Wong crazy. Like many children, they have trouble accepting the difference between what is possible in fantasy vs reality. Thus they decide to free the local sea lion, Slappy. This is a giant mishap of an adventure. Slappy hides at their home. He takes bath, eats a lot, lounges on the couch. It’s like they brought a slippery teenager home.

The Stinkers realize they’ve made a horrible mistake, and Slappy is probably better off back at the aquarium. On the way back, Slappy is kidnapped by a crook who wants to sell the sea lion to the Bulgarian circus. Happens all the time. We had arrests for this the other day. More than two of them. A regular three ring circus.

Slappy is safe. The Stinkers get awards. Everyone is happy. Wong shakes his head at them. Oh you Stinkers.

The movie absolutely bombed, making just over $80,000. It has a zero from critics on Rotten Tomatoes but a 62% rating from the audience. The movie came out in 1997 so there’s a good chance a lot of kids grew up with this movie and will always have a nostalgic love for the film.

What I want to know though is when in this process was the movie name changed? The VHS, DVD, any other format is called Slappy and the Stinkers. This book though is just “Stinkers”. Not even THE Stinkers. Just Stinkers. The book would have been timed to release just before or at the same time as the movie. At the earliest, when the first trailers played. By then this movie should have had a title locked down. Marketing would have known kids dig the sea lion. Put the sea lion in the title.

The screenplay was written by the same two men who wrote the Little Rascals movie from 1994. THE Little Rascals. Stinkers sounds like a collection of bloopers hosted by Dick Clark and Ed McMahon. (Who else is old enough for that reference?!) THE Stinkers at least starts to sound like a group. Slappy and the Stinkers makes some more sense. It’s either a silly kids movie or a band playing in a college town.

There’s a part of me that really wants to look into this and find out when and why the title of the movie changed. Send unsolicited emails to the writers, director, movie studio. Honestly, if we weren’t in the middle of a pandemic I probably would. Right now I feel like anyone struggling with either their money or health has zero interest in my email asking about a sea lion from nearly 25 years ago.

Next year though… I intend to solve the mystery of Slappy.