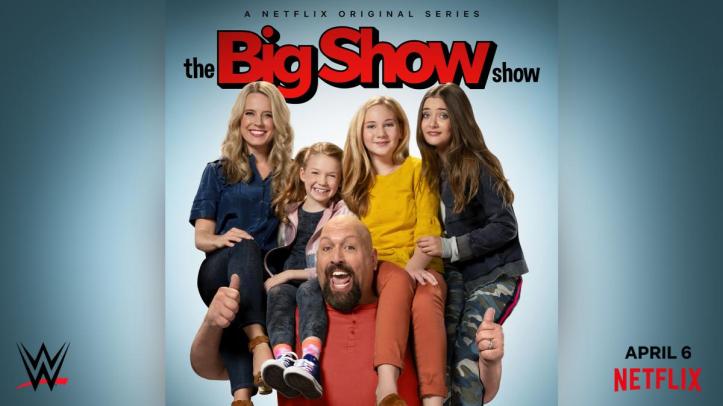 I’m a longtime wrestling fan. I’m stuck at home. I have a Netflix subscription. I’m trying to find things to watch with my 6 year old that I also enjoy. All of this is a perfect catalyst to binge watch all eight episodes of the new Netflix show from WWE Studios, The Big Show Show!

The Big Show has recently retired from active wrestling. He might show up here or there, but his days of being on the road 300 plus days a year are done. Big Show is legit 7 feet tall and currently around 380 pounds. He started wrestling in 1994 and won multiple world, tag, and secondary titles over his career. He also has surprisingly great comedic timing. While looking for something to do in retirement, as he’s only in his late forties, Big Show landed in Hollywood and stars in this family sitcom.

Joining him are his wife Cassy and their daughters Mandy (middle child with political aspirations) and J.J. (budding evil genius). The first episode adds his oldest daughter from a previous marriage, Lola. Lola provides many of the conflicts of the show. Building a new life, new school, new friends. Where does she sleep? Should Cassy be a mom or a friend?

The first episode is rough. I don’t want to call it garbage, but if I had to wait a week in between episodes I may have not gone back for episode two. Every show is allowed to grow and find themselves but every viewer is allowed to turn the show off at any time. And episode one was nearly it for me. Everything seemed forced. It seemed trite. It felt like a show I’ve watched hundreds of times since childhood.

By episodes two, three, and further I accepted that. It’s not meant to be a groundbreaking new sitcom. Nor is it for adults. This is a classic family show. This is an escaped Disney Channel show. Showy with a Chance. Giant with a Blog. Good Luck Biggie. Call it what you will. It is meant to be silly, slapstick at times, and broad.

This is probably the best family programming with WWE’s name on it in years. I watched all of it. My kid came and went for some. My wife watched some. I told friends about it who have watched some of the episodes. To every person the reactions was “nice”. This is the perfect show to watch Sunday night after dinner at Grandma’s.

Once I accepted what the show is instead of what I wanted it to be, everything became even more enjoyable. Jaleel White, Urkel from your childhood, regularly appears as Big Show’s friend and he is fantastic. A notable veteran of family sitcoms, he brings great timing and sells every line.

You know there’s going to be an episode featuring other wrestlers and surprisingly there’s only one. Mick Foley, Rikishi, and Mark Henry guest on one episode and they are tremendous. It looks like they were enjoying their time on set and that comes through in every moment on camera. It doesn’t hurt that they were given great lines too.

It was odd to hear everyone call him “Show”. This man’s parents didn’t name him Show. He has a real name. I say this as someone who has multiple friends and fellow bloggers that call me by my nicknames. If anything it seems odd his wife would call him Show. Most spouses have specific nicknames for their partners. That don’t usually correspond to names they had at work.

If you want to turn your mind off to the world. Or if you’re looking for something safe to watch with your family, this needs to be at the top of your list. Don’t come in thinking it’s anything other than what it is. TGIF, Nickelodeon, Disney Channel themed show. Not just for fans of wrestling, but for families looking for something to do together while at home.