Bugs Bunny and Taz in Beauty and the Feast. A Book Review. 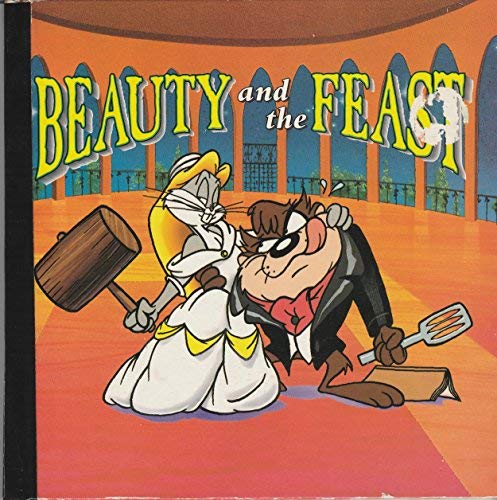 The latest streaming service will launch later this month. HBO Max will feature shows and movies from their archives as well as all new features. Including all new Looney Tunes cartoons. The classic ones are many decades old. Even Tiny Toons is a generation ago. Some of the modern updated versions of the Merrie Melodie crew has fallen flat. Little did I suspect the best versions of this animation would be on the printed page.

This is a hardcover square kids book released in 1996. This story parodies the instant classic Disney animated movie Beauty and the Beast from 1991. This is not just a take off of that movie, but a love letter to everything absurd in Looney Tunes.

Bugs takes a wrong turn, as he is known to do, and ends up in front of a run down restaurant. He goes inside to ask for directions and maybe have a bite to eat. The restaurant is destroyed and hasn’t seen a customer in years. A waiter tells Bugs that 10 years ago a crate broke open that was holding not only the Tasmanian Devil but also a newspaper featuring a restaurant review. Taz made his way to the location and not only ate everything in sight, but scared away the patrons.

The restaurant is best known for their delicious rabbit. Of course you know this means war. Taz shows up wanting rabbit, Bugs refuses to be eaten. Bugs Bunny escapes microwaves, pots, and ovens. All of which sing. Yes, there’s a version of Be Our Guest that works far too well. The Simpsons “See My Vest” well. Bugs insists Taz dress the part to eat at a fancy restaurant, taming the Beast. It goes well and once Bugs suggests other makeover options Taz has had enough and spins his way out of there. The restaurant is saved and the village is happy. Bugs takes a bus to Albuquerque.

What could have been a nothing children’s book becomes a classic of Warner Bros. animation. How would any of us describe Taz spinning into a room? Impossible. Yet here, “he wheezed and burpled and whirled himself into a fury.” I want to read that aloud. To my kid, to your kid, to the world. But not in his voice. No, that has to be saved for later when Taz first sees Bugs Bunny and reacts. “Ughoooeegh! Gleesptzgabelch-raa-baat?!” Absolute gibberish yet I’m well aware how to pronounce every letter.

Not only does the art look at classic cartoons that we all watched in syndication, or TNT, or Cartoon Network, but also the entire oeuvre of Bugs. All of it. Even his classic and legendary PSA. Remember to turn the pots and wrap up the cords so kids don’t get hurt:

Remember now? Those animated appliances were never seen again. Yet they absolutely have cousins that sing and dance in this decrepit restaurant.

This book made it’s way into my personal collection and I hope acts as inspiration for all of you to look for fun things. It’s entertaining as an adult, but a blast to read to a child.