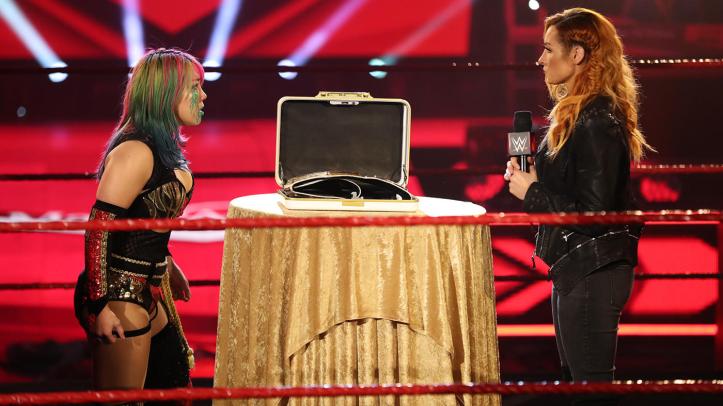 The spoiler full quick recap of the show. What you can skip, what’s a must watch, and what happened.

Becky Lynch comes out to say she has to leave. Asuka comes out angry. Becky opens the Money in the Bank briefcase to reveal the Raw Women’s title. Asuka won the title the previous night. Becky has to leave to “be a mom”. Segment had a weird energy but I think Becky was so emotional. She was The Man and now has to walk away from it all with no idea when or if she’ll be back. Asuka is tremendous in this segment.

Bobby Lashley beat Humberto Carrillo in a No Disqualification match. A little fighting on the outside and with weapons. Lashley uses a Full Nelson to get the win, which is a perfect finisher for him. On the comic grading scale, Fair.

Angel Garza quickly beats Akira Tozawa. Team Zelina Vega fights after. Drew McIntyre came out and takes out Garza and Theory. Face off with Andrade. Maybe an upcoming match. A nothing match to set up something later.

Drew McIntyre defeats Andrade. Later arrived. Good but short match. Shame on a 3 hour show they didn’t get more time. Good but could have, and has been, better. Drew challenges King Corbin for next week.

On a Moment of Bliss the IIconics return and challenge the Womens Tag Team Champions.

IIconics defeat Alexa Bliss and Nikki Cross in a non title match. Good/Fair and the inevitable title match will be better. IIconics need to switch up their annoying way for an empty building. Annoy the announcers or cameramen or something.

R-Truth, Ricochet and Cedric Alexander beat Brendan Vink, Shane Thorne and MVP. Truth brings out his Pretty Ricky persona. I don’t know what the hell was happening here. Lashley comes out, takes out Truth, and tells MVP they need to talk. Fair match. Important thing was MVP setting up his stable.

Aleister Black and Rey Mysterio beat Seth Rollins and Murphy by disqualification. Good match that was really getting going when Seth slammed Rey into the steel steps eye first causing the DQ. Seth looks broken after his loss to Drew and Becky’s announcement. The Messiah is questioning his own faith. Good to see Black and Rey alive. Curious where Seth goes next.

Aleister Black confonts Seth Rollins in the back. Black and Murphy fight. Seth walks off. Whatever they’re doing with his character could be interesting as this moves forward.

Shayna Baszler beats Natalya. Fair. They both know what they’re doing but it was a glorified squash. Natalya acts upset after the show. Maybe going somewhere?

Randy Orton challenges Edge to a wrestling match at Backlash. Unlike their WrestleMania Last Man Standing match. Meh. Orton isn’t going to keep losing. Which means this is probably 2 out of 3 in a series finishing up at SummerSlam. I’m not a fan of Orton and would like to see Edge against someone else. Poor for me but if you like Orton you might enjoy it.

Watch for Becky, IIconics coming back, Drew vs Andrade.