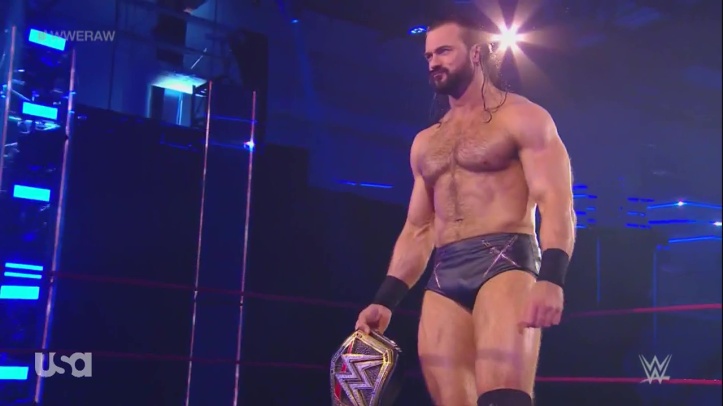 Your spoiler filled quick review of the week’s live wrestling events. Well, as quick as I can talk about a three hour show.

The Brand to Brand Invitational will take place four times over the year.

Randy Orton and Edge talk about their upcoming “Greatest Wrestling Match ever” at Backlash. Edge wears a shirt with his dumb new Grit trademark but then says a lot of great things in his side of the promo.

Murphy beats Humberto. Good match with lots of chemistry. These two need more time and an audience to react.

Post match beat down. Aleister Black with the save.

Charlotte Flair defeats Ruby Riott. Too short. Match was just getting good when it ended.

Segment one of Viking Raiders vs. Street Profits in an Axe Throwing competition. The “quest for smoke”.

Kairi Sane starts the Asuka celebration. Kairi plays Asuka’s theme on a recorder. Nia Jax shows up. Asuka attacks her and knocks her out of the ring.

Alexa Bliss and Nikki Cross win by DQ over the IIconics. Peyton loses it and runs Alexa into the ring post three times causing the disqualification.

Kairi plays the recorder until Nia attacks her.

The IIconics argue backstage. Billie slaps Payton then they both cry and hug.

Shayna Baszler beats Natalya in a submission match. Nattie is upset and doesn’t leave the ring. She’s in the way as the crew tries to set up for the Kevin Owens show. Nattie starts destroying the KO Show set.

Owens brings out Team Zelina Vega for the KO Show. Then he brings out Apollo Crews. A fight leads into a tag match.

Kevin Owens and Apollo Crews beat Angel Garza and Andrade when Austin Theory tries to interfere but hits Garza allowing Crews to get the pin. After the match, Garza and Andrade attack Theory and kick him out of the group.

Axe Throwing part 2. It’s actually a funny segment. The Street Profits put an axe through the water barrel. Offer up the solo cup instead. “This is nothing like Thor.”

Aleister Black beats Murphy by DQ when Seth Rollins sees Austin Theory still beaten up at ringside and raises him up. Seth offers his hand and Theory sees the light. He jumps in the ring and attacks Black. Theory is now with Rollins.

Axe Throwing part 3. The police show up because an errant axe went through the windshield.

Axe Throwing part 4. The police let everyone go because one finds Ivar to be cute.

Edge’s promo is worth watching. Vikings and Profits was actually funny. Kairi playing the recorder is great. Two matches, Humberto and Murphy, Ruby and Charlotte; are good but not given enough time to be must see. There’s a lot of build up for future stories and matches, but not much to seek out from this show.