Garfield: The Me Book Review.

“A guide to superiority; how to get it, use it and keep it.”

This how to guide written by America’s favorite fat orange cartoon cat (and more on that soon) came out in 1990. A self help book to teach the reader how to be as conceited as the lasagna loving Monday hating cat himself. Every bit of the book is tongue in cheek but also an accurate depiction of some people. Your Gordon Gecko “greed is good” types. Give me money, everyone else is on their own. Even the first page of the book puts this point across.

From the very beginning I had a keen sense of who and what really mattered in my life. All the other kittens on my block said “meow”, I preferred “me first.”

Of course it’s silly to think of a fictional cat, or I suppose a real cat too, living his life under such a mantra. Yet there are people in every part of real life who also believe this. Willing to step not only over but also on top of you on their way to one more nickel. This is not just ego, its a conceited view of the world.

A healthy inflated ego is the cornerstone of personal success, for unless we have a good opinion of ourselves, we will never be able to force that opinion upon others.

All of this seems absurd coming from Garfield. These words along with some classic comic strips worked throughout the book is entertaining because it’s ridiculous. But take Garfield’s name and image off the front. Actually, just take his image off. Sell this as “by Jim Garfield”. He’s a self help guru who travels the country sharing his message on how you can become just as rich as he and for a mere donation of one hundred dollars he will share those secrets with you! These scam artists show up all the time and unfortunately aren’t as recognizable as this overweight orange opportunist. Well, not all of them.

Again, that’s not to say this isn’t a funny book. When I read “(Jon) thinks “Clearance” is the name of a designer” I couldn’t stop laughing and knew I had to steal this joke for use in life. Then the book turns it’s back on me and instructs readers, “we need to concentrate on ‘personal superiority,’ which means that you are generally more intelligent, talented, and attractive than your average pro wrestling fan.” My entire life resembles that remark! 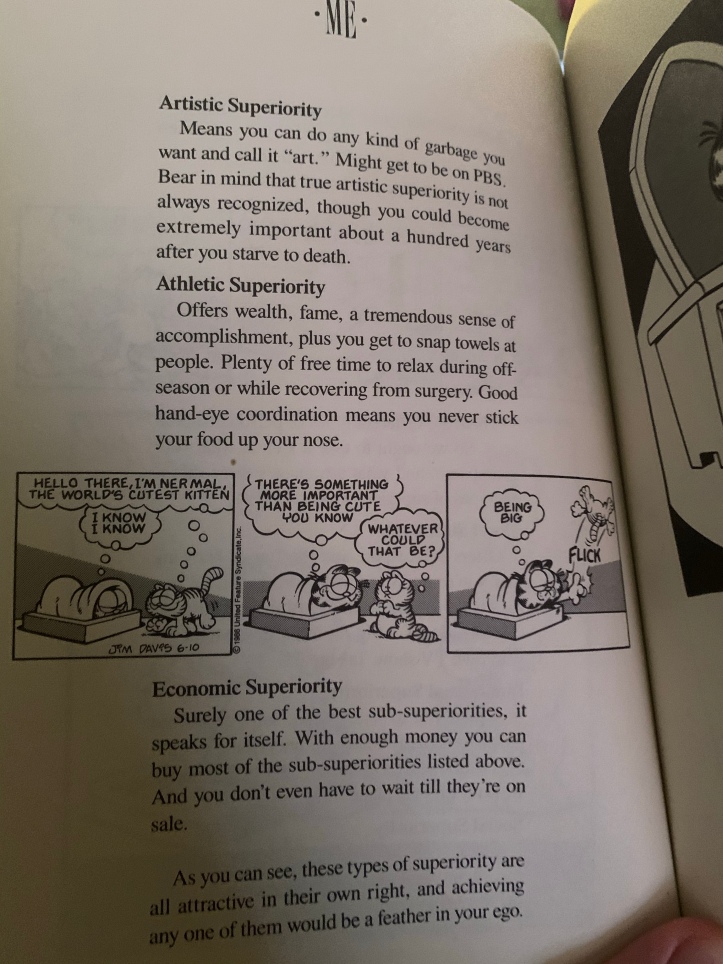 Garfield gets way too cocky here. Just look at how he disposes of Nermal. He clearly has no more flicks to give. (Correct font use is very important in comics.)

There is valuable information in here that can come in handy for your average not egotistical person. For example, Garfield gives better job application advice than any job assistance program.

This is absolutely true. Never put random friend, co-worker, or previous boss on a resume. Put a curated group of people who will say you’re God’s gift to the world and the company you’re applying for will be better off with you as an employee than without.

But to go back to the idea of putting a book like this out attached to a real person, some of this advice within is seen every day of our lives. And not in any way that makes our lives better.

Pledge to me! And wash my hands/paws!

Unfortunately, there are public figures who pretend to be smart and exclaim this loud enough and long enough that others start to believe. To the detriment of all.

I did not expect a joke from a 30 year old book to land fresh today but in a chapter on “everything you need to know about…” with a world history section lied this treasure.

1492. Christopher Columbus discovers America. Columbus makes four voyages to the New World, on all of which he completely misses North America, while continuing to think China is just around the corner. And this guy gets his own holiday?

This is a cartoon taking all the wind out of Columbus’s sails thirty years ago. The more one reads about the history of Columbus the less and less reasons there are to put him on a pedestal. Other than “but my school teacher told me so”. “Discovery of America” day could be a good compromise.

But compromise is not a lesson Garfield is teaching. Be fat, lazy, sleep all day, but carry a false bravado so strong others believe you’re something special.