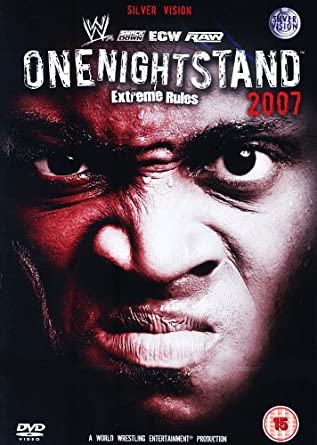 Long time readers and listeners know I have a friendship with the Longbox Heroes family of podcasts including At Odds with Wrestling. At Odds has been throwing in a homework section of the podcast, in which the two hosts will watch a classic wrestling show. Classic is a loose term. If I have the video means and the time, I’ve been joining them in this process. On the past show Adam suggested this pre Extreme Rules WWE ECW era pay per view. While listening I thought he was trashing every match. After watching it though, I think it was veiled praise. This totally threw me off and I enjoyed the hell out of the show.

The show starts out over complicated. There are three two man announce teams for the three weekly shows. Plus the entrance set has all sorts of weaponry attached floor to ceiling. Looking like a hardcore vision board.

Randy Orton vs. Rob Van Dam in a Stretcher Match starts the show. What a fun match. This was so good I’ll say it, I enjoyed this better than Orton’s’ work in Greatest Wrestling Match Ever. My only problem is the larger story of the match is RVD struggling with the after effects of a concussion. He takes numerous head shots and even hurts himself on offensive moves. It’s an incredible sell job and the match, which RVD wins, was so much fun to watch. But there was something really bothering me with using head trauma as a story and that will become evident later.

I remember loving every single wrestler in this match at various points in their careers. This is very pre NXT and shows the need for that brand and the PC. Dreamer could have been used to help train new talent. Punk is already marked to be a star. The heel team needed more work, which they weren’t getting on the road for WWE ECW. All of them would have benefited from the in house training NXT now provides. For who everyone was at the time of this show, this is a good match. This would have been a crowd pleasing main event for any indy company at the time.

So far I’m enjoying this PPV a lot.

What a hidden gem! This had so much going for it. Both teams look great. Both are playing to their strengths. Both are coming up with new spots and ideas in a type of match that can seem overdone at times. Shelton is the star of the match and it’s a shame he never caught on at a higher level. Charlie Haas’s gear is suspect and I start to look up some information before the next match begins.

Mark Henry vs. Kane in a Lumberjack match.

By far the worst match on the card. Both big men tried their best but it’s a molasses of a match. Slow and messy. Even the Lumberjacks seem lost and confused for what they’re meant to do here. Mark Henry wins with a bear hug, and he deserves to be pushed as a strong monster. But this is odd.

I messaged Adam that there was only one bad thing on this event. It’s here, and it’s Benoit. The Benoit double murder suicide takes place 3 weeks later. Three. Earlier in the card RVD takes multiple hits to the head in a working with a concussion story. Charlie Haas is the early Image Comics version of Marvel’s Benoit. Looking so close to a copy but just enough different to believe it’s a separate person and not a clone. Then here he is as a Lumberjack. One of the rumors going around was Benoit was depressed over his position in WWE. He saw his switch to ECW as a demotion and he would never reach the world title scene again. Looking at who the other Lumberjacks are, that’s not a far leap to make. Miz eventually got there but no one at this point could have seen that actually happening. He’s not even teamed with Morrison yet. He’s not even John Morrison yet. Seeing Benoit on camera so close to his death causes everything about or adjacent to him to look like a warning sign.

Honestly, I think this is the best Lashley match I’ve ever seen. He sells this three on one beating. He gets the crowd so into the match. Everyone is going nuts for the pinfalls. The whole world is against him. But he keeps trying and wont give up. That guy could have been a star. I don’t know what never clicked with Lashley in the 13 years since but this empathetic hero version could have been a star. A better match than it had any right to be.

Oh. My. God. I had reservations watching this match with 2020 eyes. Some of that happened. But I was also in awe over how amazing Melina looks here. Candice comes out and looks nice but I was never a fan. Melina came out and I had to stop everything else in life for a moment to just look. There’s the thing, there is nothing wrong with noticing a woman who’s job is to be hot. This is Hooters logic. Come in, enjoy the view, don’t touch and don’t be a pervert. As long as everyone is on the same page, we’re all good here. I don’t know what the women in WWE at this time were asked to do or told to do and I have no doubt there’s bad stories. For this match alone and not taking anything else into consideration: it’s a great cheesecake Divas match until Melina goes under the pudding. The risk of choking and not being able to breathe in this pool of pudding is great. To a disturbing level. There’s a difference between enjoying the fight and worrying about the lives of the people involved. On the list of safety considerations WWE should have taken, I add yet another one.

Maria comes out to interview Candice for winning the match then she dives into the pudding too. I have to imagine a lot of young male wrestling fans kept a tape or DVD of this show hidden under the mattress.

Edge (World champion) vs. Batista in a Steel Cage match.

Disappointing. I like the story of the match. Edge as chicken shit heel trying to escape but not wrestle. Batista looking to regain his former glory but it always seems to slip by. I’m into it but this match never clicked for me. Edge’s thong is exposed and I have to point that out because after the pudding match if I said someone’s thong is hanging out and asked anyone to guess who – Edge isn’t the answer.

Cena works his ass off here. He tries so hard to get a passable match out of Khali. This is trying to have a match with a broom level. A seven foot five hundred pound broom. So many people crapped on Cena for years but he loved wrestling and always pushed himself to be the best he could be against any opponent. I enjoyed this match more than the Steel Cage match just because Cena is trying harder. There’s more effort in this match.

The undercard of this show is great and then it falls apart at the main event level. Which shouldn’t happen, but here we are. I think it’s worth anyone reading or anyone listening to At Odds later to enjoy. The near 3 hours flew by and I didn’t feel like I wasted a moment of my life on it. I had no expectations going into this show and in this strange era of wrestling this may have been the best thing I watched all week.