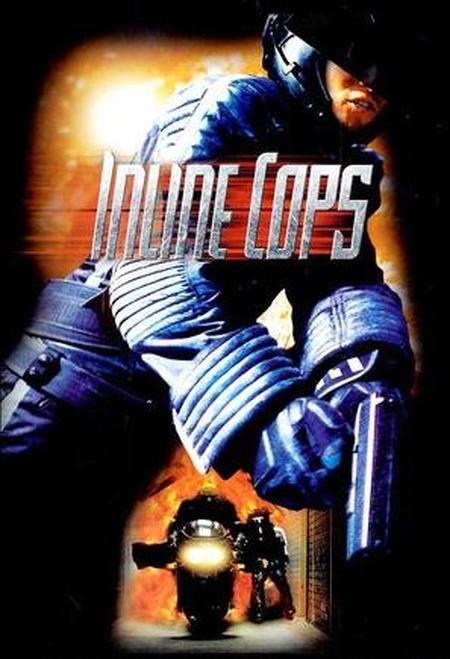 This forgotten TV movie fell into my circle of knowledge recently and I’ve spent way too much time trying to find it. As far as I can tell, this movie does not exist online through any means legal or otherwise. This movie is from the far off year of… 1998.

That’s what upsets me the most about the lack of information. Homes and colleges had internet in 1998. No, video wasn’t as easy to access as it is today but there were still photographs, message boards, and tape trading. This aired on FOX. I’m not trying to find a local program or something from another country with a name change. It’s also so absurd one would think there is a cult status around it. Alas, no. So I’m writing a post hoping to discover someone with a tape, some private group, anything that could bring me closer to Blade Squad.

Blade Squad (also called Inline Cops in Germany, and I’ve had no luck on that search either) aired August 12, 1998 which was a Wednesday. This TV movie was most likely intended as a pilot. Air in August, see what attention it gets, plenty of time for a Blade Squad TV show to replace something else by January.

In a futuristic NYC, or maybe LA, I’ve read both, the Blade Squad is a group of misfit police officers who patrol the CyberPunk inspired city on their Roller Blades. Sorry, brand name. On their inline skates. Oh, they also have jet packs so they can skate faster. The higher ups in the force want to get rid of the group. The skaters are trying to stop a string of robberies. There are bigger connections involving death and revenge that all of the players are not aware of. Some familiar but not famous actors appear.

I would love to give a review. Is the skating good? How are the stunts? How futuristic is it? How is the acting, the story, the effects. I have no clue. All I can find for video is the commercial for the German version

When the 1980’s gave us the A-Team, Knight Rider, Air Wolf, Dukes of Hazard and more there is a place for an hour long drama based off of a cool mode of transportation. The extreme sports were popular and everyone had inline skates at the time. I don’t do anything active and I had a pair. Got the concussion to prove it too.

Shannon Elizabeth is in this too. I don’t know if she’s a cop or crook or random person on the street. But I know how search engines work so I’ll put her name in here too.

I’ve found a review from the week it aired on TV. Another blogger found a VHS copy, with the amazing tag line ‘The only thing faster than their bullets are their blades.’  Oh, they also have a secret headquarters hidden inside a garbage truck.

None of this makes me want to watch the movie any less.

I’m posting this just to see if anyone who knows a little more than me sees this and we can combine our works. Or maybe someone knows a link.

Side note: I found a lot of abandoned blogs while researching this. If you wrote for a day or for years and either your site is on a free provider or you can afford the domain – keep your posts up. You never know when another blogger could be looking for something ridiculous that only your site has previously discussed.