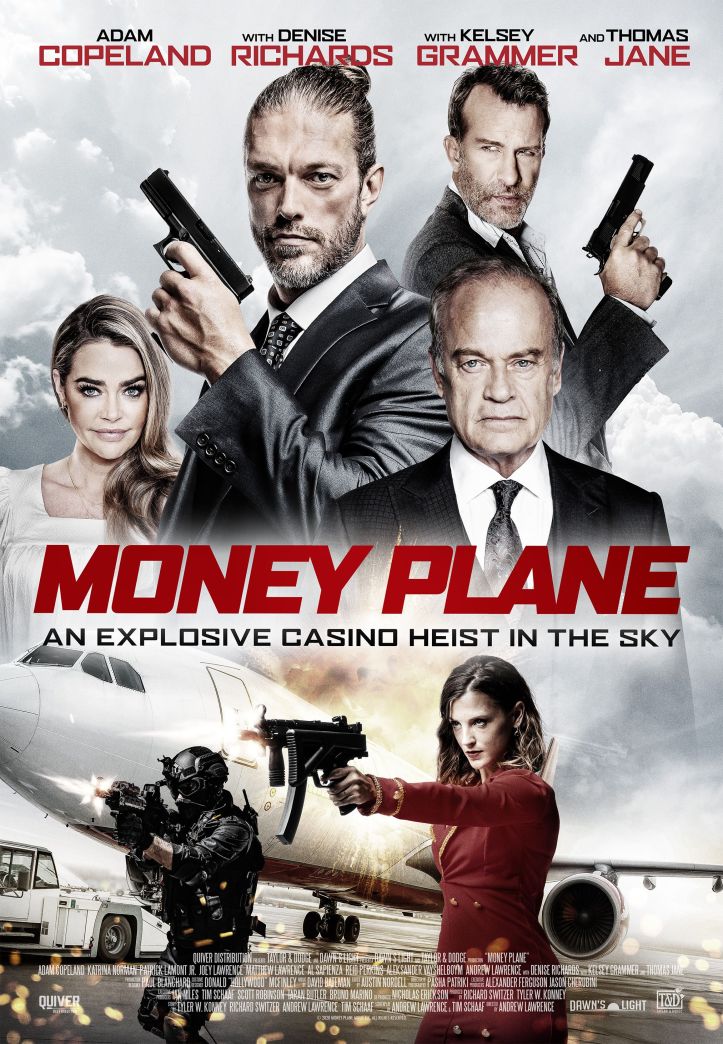 Why is Denise Richards on this poster? She is in maybe two minutes of the movie as Edge’s wife. Anyways…

This movie review is an At Odds with Wrestling homework assignment. So you know who to blame.

Money Plane! WWE Hall of Famer Edge is professional thief Jack Reese. He and his team have a job go sideways and now owe $40 million to crime boss “the Rumble” played by Kelsey Grammer. Grammer agrees to spare their lives if they successfully steal all of the cash and crypto currency from an illegal airborne casino where the worst of the richest gamble. The Money Plane.

The movie is just over 80 minutes and as fast as the movie moves it also leaves a lot off the screen. It might be easiest to go over the events of the movie and then break it apart. Full spoilers from here on and a warning up front.

Edge and team try to steal a painting but get screwed over. Kelsey buys their debt and then sends them on this mission. Far too quickly Edge and two members of his team are given covers as criminals that everyone has heard of but no one has ever seen. And as a stewardess. On the Money Plane, which would most likely have thorough background checks on anyone working for them. Anyways. Everyone is on the plane with a heist plan. Edge plays some Texas Hold em and asks to retire to a room to recover from his losses. He transfers his money to his associate/team mate Trey (Mr McGillicutty is his cover name). McGillicutty agrees to the next game and now must play Russian Roulette. He’s stunned and the banter back and forth to set up this game is one of the highlights of the movie. That scene over, McGillicutty starts placing bets without any knowledge of what he is betting on. Bets are placed, a video appears, and all the gamblers see how long a person can live in various scenarios. All of which cause more questions.

Meanwhile, some of the gamblers really want to fuck Isabella, our teammate/stewardess and follow her throughout the plane as she’s trying to steal the money. She uses either her sex appeal or fighting skills or both to get out of these situations while locating the funds.

Meanwhile meanwhile, Edge is retiring to his room but actually takes over the cockpit in a fairly well done fight within a confined space. Then, if you’ve ever wanted to see one of the greatest wrestlers of all time who was able to transition into acting sit in a chair for one hour. Well, do I have the movie for you! Edge talks to his team. He talks to Kelsey. He flies a plane. He pieces together who is screwing who. He wins the Iron Man match if it was decided by sitting down instead of pinfalls.

Eventually the team discovers Kelsey set them up all along. He moved the painting and he wants all the money. Edge tricks him into revealing his plot over the Money Plane’s PA. The team donates all of the money and parachutes out. The men behind the Plane put out a bounty for Kelsey, and include it as one of the bets. Off camera the team steals the painting and then sells it after their theft creates more interest in the art.

Oh! I almost forgot. We have two more members of the team. Iggy is on the ground and sets up tech to download the crypto currency. He’s discovered and shot at but help arrives. One of Edge’s former military friends has “sources” and favors and also babysits his kids. He not only pilots a drone to save Iggy but also takes out a few gunmen at his house. This character is also played by Thomas Jane and feels like missing scenes from his Punisher movie.

That’s the movie in a nutshell. A lot happens here but also so little. I know the movie has a small budget, but this is so clearly two side panels of a plane and a blue curtain. With furniture rearranged to imply other parts of the plane. I’ve already questioned how a stewardess just shows up. The Money Plane runners are clearly the smartest ones in the room. The house isn’t going to lose money. Don’t cheat, don’t harass the staff. They have other people on board for any vices. An odd code of honor for criminals.

For such a large criminal organization there is a severe lack of personnel. Edge and his team meet little resistance as they explore the plane. Most of it comes from other gamblers who are also sneaking around.

It’s not a bad idea by any means. Call it Die Hard on a plane. But then there is so little done with the movie. At no time did I think any of the team would actually die. There is so little done with all that the plane could be and hold. With how large this plane is and how long it would take to move back and forth. The worst example is when Edge somehow moves from the cockpit to the belly of the plane before parachuting out. No one stops him? No one questions his movements?

In the end I think this movie is a good shell that needed better writers to flesh it out. More time or money or pages. More fight scenes. More peril. More scenes of the depravity onboard the plane. Also, because Kelsey is defeated at the end we’re supposed to celebrate. Yay the good guys won. There is still a plane full of millions if not billions of dollars worth of criminals and their international activity. No one won anything. The Money Plane can’t even flesh out defeating the big enemy. Unless this means there’s a Money Plane 2 coming soon.