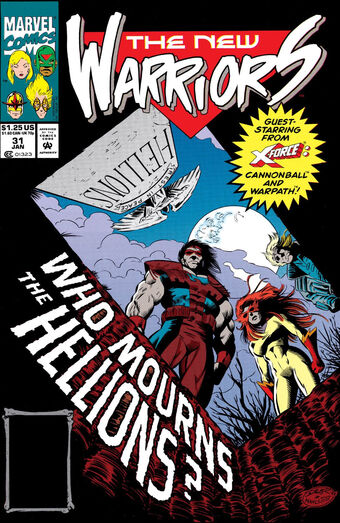 “A eulogy for the Hellions.”

In the pages of X-Men, Emma Frost’s teenage mutant team The Hellions were slaughtered by Trezor Fitzroy and his Sentinels. Emma was overcome with grief over the loss of her charges, and this began her character change into a member of the X-Men. Some of the remaining former Hellions who weren’t present, Firestar of the New Warriors, along with Cannonball and Warpath of X-Force, travel to the hidden city of Nova Roma to inform Empath and Magma of the deaths of their former friends.

Villains at times, manipulated for sure. Firestar has issues with Empaths’ mind controlling powers. She never wants to feel that sort of invasion again. It’s not rape, but I think it’s as close as an analogy to it that 1990’s Marvel Comics was going to get. Firestar feels a need to bury and also honor the past. She and her remaining former teammates have their memories, and no desire to go back, but they also have to recognize that it was an important part of their lives that put all of them where they are today. Empath becomes the villain of the piece. He is manipulating everyone in this lost city but he also doesn’t know any other way. He fears the change. He fears everything falling apart all over again. It takes all of his power to constantly control the environment but in his mind that is the easier option than changing everything. Not only for him, but for his love Magma.

At the end of the story, Firestar burns the records of the Hellions alongside Cannonball and Warpath. She then heads to the home of fellow Warrior, Namorita, and says she’s ready for a change. Firestar emerges in her brand new super hero outfit. Not the one she was given from Emma Frost as a Hellion.

(Yes, the one and only Speedball appears in a “meanwhile” segment setting up a later story.)

Firestar sees many paths from her former teammates. Those that have passed. Those that have grown up past New Mutants and into X-Force. And those hiding in a false reality where they can pretend nothing is changing and retain a facade of status quo.

The story is about Firestar growing up. Much of her past is literally dead. She was forced into a costume, forced into this life, forced into a team. She was even blackmailed by Night Thrasher to join the New Warriors. For all of her super powered career she’s reacted to what other’s chose for her. Never choosing her own destiny, until the end of this issue. It’s a powerful message about taking control of your life even if it means leaving the familiar behind.

This is continued as an exclusive Patreon post. Sign up for the weekly Patreon posts over at https://www.patreon.com/maskedlibrary