Battle of the Tiger Snacks!

Today we have not one, but two, all new delicious tiger themed snack cakes to evaluate. One is a limited time return of a classic product. One is a take off on a recent cult hit TV show. Which one tastes the best? Let’s head into the tiger pit to battle it out and crown a winner! 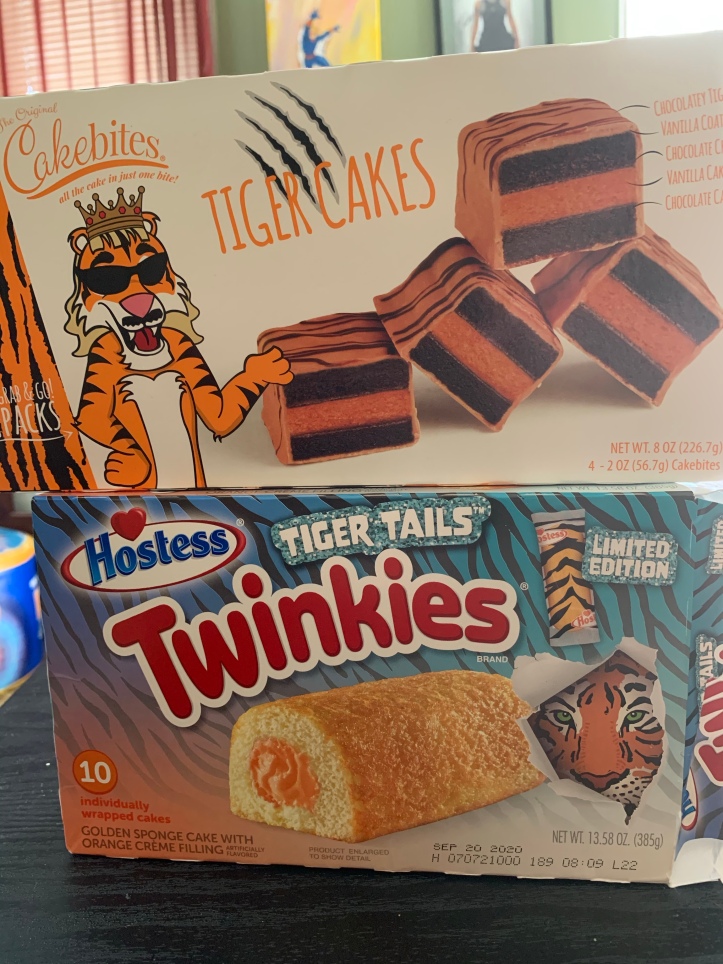 Here are our challengers. From Twinkies, and sold exclusively at Walmart, Tiger Tails! And from Netflix and other Exotic locals, Tiger Cakes!

The Tiger Tails are the simplest to explain. A regular flavor Twinkie cake, with an orange cream filling. The cake tastes exactly the same and the orange filling is different enough to taste like something new. A slight orange kick, but it’s overpowered by the familiar sugar flavor in the creme.

I might be weird, but I prefer many of my snacks after they have spent some time in the fridge. This helped the Tiger Tail firm up a bit so it didn’t crumble and ooze while opening the packaging then completely fall apart with the first bite.

The packaging is the only time a stripe is used by Twinkies. It’s only on the plastic, not on the actual cake. Chocodiles are a thing. The technology is there to drizzle some sort of chocolate on top to give a true edible tiger experience.

Next up is this Tiger King, but not, but clearly is a take off of Joe Exotic. Is he making any money off of this or is the parody law that strong? This one, much like his series, surprised me every step of the way.

There’s (not) Joe. With his king crown, mustache, sunglasses. And on the back he’s just celebrating America and having fun. Time to break out the White Claw and feed someone’s husband! But first, let’s have a look at this snack.

Hello, what do we have here? A sealed package hiding the true contents. I expected a Twinkie type clear cellophane. But now I have one more mystery to unwrap.

A tray of snacks?! What madness is this? I was so obsessed over the Tiger I neglected to read that these are cake bites. Already cut up into bite size amounts. When you’re going to feed a tiger, sometimes you need to cut up their meat first. Don’t want them to choke.

This is surprisingly dense. Cake, chocolate, and orange tiger filling. Plus the shell over all of it. What at first seemed like less snack, and less per box, turned out to be more filling. There’s a lot of sugar going on here.

Once I stopped shaking I was able to take an impartial look back at what I had just put my body through. The Twinkie was a nice twist on an old favorite. Sometimes you crave a Hostess or Little Debbie snack like in childhood. It never holds up to the memory, but one box is enough to satisfy those nostalgic cravings for a few months.

The Tiger King Cakes (oohhhh, tiger king cake. Like for Mardi Gras. But the point is finding the plastic baby tiger inside) was a brand new concept in waxy baked goods. The new novelty of it had me excited but now that some time has passed, it’s just another snack.

I would recommend the cake bites if you’ve never had them. Just to try something new. But the all time winner is still the Twinkies. I might never buy a cake bite again, but I’ll definitely have a Twinkie craving in the future.